Hypoxia [dissolved oxygen (DO) < 2 mg/L] is one of the key threats to some of the most productive regions of the marine environment (e.g., estuaries). Although mortality can occur, mobile organisms have the potential to avoid the most severe low oxygen conditions, but suffer ecologically significant indirect and sublethal impacts as a result. In Washington State, USA, a fjord estuary of the Puget Sound marine ecosystem, known as Hood Canal (110 km), regularly experiences seasonal hypoxia. My dissertation addresses several important gaps in the current knowledge pertaining to the non-lethal biological effects of hypoxia on the mobile benthic and pelagic species of Hood Canal – for the sake of time and your sanity, I’ll be focusing on the benthos. Using acoustic telemetry, I quantified movement patterns and distributional shifts of Dungeness crab (Metacarcinus magister), an abundant and widely distributed species. Although highly mobile, Dungeness crab displayed more localized, rather than large-scale, directional movement relative to hypoxia. More specifically, the tagged crabs showed significant distributional shifts towards shallower waters. As one of the most important fisheries in Puget Sound, I wanted to then investigate the generalized relationship between hypoxia and the Dungeness crab harvest (3-S) management strategy. Inferred by the shoaling behavior from the field, an age-structured population model was constructed to test several hypoxia-scenarios with other stressors, including harvest, illegal crab fishing, and incidental capture mortality. It was found that the 3-S management strategy is most sensitive to the influence of hypoxia when other sources of demographic restrictions are considered, underscoring the uncertainty associated with a data-poor species under multiple anthropogenic and environmental stressors. 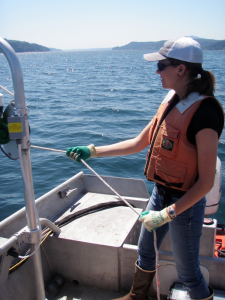 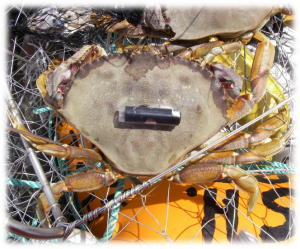 Halley E. Froehlich, Ph.D. (Halley is the untagged one on the left)